Welcome (back) to the Wacky Watercooler April (Fool) Blog Hop! If you’ve already been hopping, you probably just visited Priscilla’s page. If this is your first stop, just follow the buttons at the bottom and you’ll make it all the way back around and see some amazing projects in the process.

When I read this month’s challenge, I was somewhat at a loss for what to do. ‘A project that isn’t what it appears.’ Hmmm. I kept thinking and thinking and only one idea came to mind. And even that idea I had no idea how to actually create it. So I thought and thought some more. Somewhere along the way I concocted the card below.

I decided I wanted to keep it very simple. Here is the card front.

Sometimes simple just seems best. We go overboard sometimes thinking we need to spend hours on a single card. I especially like that the greeting I chose from the Crazy About You stamp set doesn’t really give away what the card is. Am I just saying ‘Thanks’ or ‘I love you’ or ‘You rock?’ Who knows? Gotta open up the card and see!

So let’s check it out…

Surprise! Simple, right? Ha! I wanted it to seem simple and understated, and then you open it and…WOO WOO!!! Sirens go off and everything!

So how did I do this? Well first I made about a million stars of different sizes and colors. I left some plain, stamped some using the Bright and Beautiful stamp set and embossed some as well. Then I had to create the pop ups. There are two pop ups in the center, and two accordian-style pop ups on the sides. The accordian-style pop ups were easy to make- just fold a strip of paper back and forth 5-10 times. Then attach it to the card and the back of a star. The two pop ups in the center I created using the following method.

So maybe that was a surprise, maybe it wasn’t. But moving on, it’s time for my other projects. After all the buildup and preparation for that card, once I finished it, I had no idea what else to feature this month. I looked around my workshop at some recent projects and decided to go with a theme – stars.

I made this next card during my Sassy Stampers team retreat this past weekend. I was ‘shopping’ through my friend Abby’s supplies and using things that I don’t have in my own collection. I forgot how fun it is to use things that I don’t have! I made this card using the Bootful Occasions stamp set for the boot of course and the Truly Grateful stamp set for the background. The Champagne glimmer paper is my favorite part.

And moving on to my third project, we have more stars. This time I chose a scrapbook layout. I offer Make and Take classes once per month, and this was one of my recent Make and Take layouts. I used the Pictogram Punches stamp set and the stars framelits dies. Creating all of the stars with my Big Shot was very easy. I started with a single color of cardstock and laid all five dies inside of each other at the same time (the same way they come in the packaging). I cranked those through to cut them, then repeated with the other colors. Sometimes I only used 3 or 4 of the dies, which created the stars with a wider border.

That’s it for now! Thanks for visiting and I hope you will continue on to Penny’s blog where the hop continues!

Materials used for pop up card: 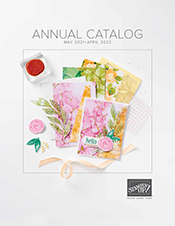